As chief resident, I work on my office computer during the day.  Often I work on the same files at night by transporting them via usb stick.  At home synchronizing my usb stick to my laptop is easy – I wrote an rsync script for that and can autorun it via a udev rule.  I wanted a similar method on my work computer.  I did not want a backup or copy of the files, I wanted true synchronization (add, modify, and delete bidirectional support).

I looked at three different portable solutions that do not require installation or administrator privileges.

Dsynchronize was the first application I tried.  The interface is included here.  I was optimistic based on the option for “bidirectional synchronization” and the box at the bottom the allowed you to be prompted prior to file deletion.  The synchronization process was fast and modification and new files were propagated easily.  When I deleted a file on the “destination” folder, the file was recreated during the next sync.  Deal breaker. 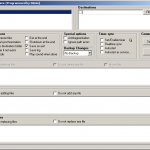 Toucan by far had the most features and well-polished interface of the three I reviewed.  At first I could not understand why it did not have a sync function but after reading the documentation online, “equalise” is essentially the same.  Toucan sports some very nice backup options including encryption and file renaming based on variables like date and timestamp.  As expected, modification and new file creation were no problem, but the “source” and “destination” model tripped up design (from my standpoint) by recreating deleted files on the destination side.  So, while beautiful, a deal breaker. 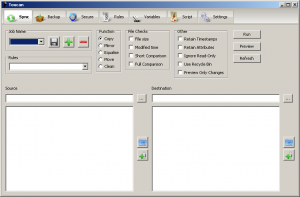 As I’m starting the think the only way to fix this problem is to run a set of Windows batch scripts, I come across synkron. The interface is fine and I can declare multiple “master” folders through the main interface.  I stopped exploring, ran a sync, then deleted a file on the network drive.  Upon resync, proof, appropriate deletion.  We instantly had a winner.  Since then, it raised in my book even higher when I clicked the restore tab and have the ability to restore recent versions of the deleted files.  Fantastic.  I can set it to sync and start and it will synchronize by work computer with my network drive at work and my usb stick.  Just what I wanted. 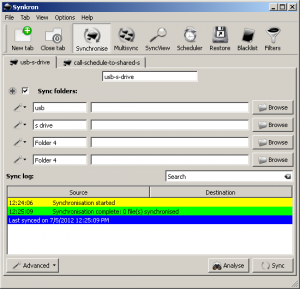 If you are using a better sync tool, let me know and I’ll post it here.